Have you ever tried coffee that has been made by beans which are first digested by a cat? Well I have!

On a recent trip to Bali, we were on a day tour and our driver stopped off for an unscheduled visit to a coffee plantation. The coffee that was being grown, harvested and roasted there, it turns out, is quite a lot more famous than we had known. I’ve found that Luwak Coffee, also known as Civet Coffee, Kopi Luwak, and ‘cat’, ‘wolf’ or ‘crap’ coffee, is known as the Dom Perignon of the coffee world.

After doing my research when we got back, it also appears to get much attention from outside of Indonesia due to the unethical way the Asian Palm Civets, the cats which eat the coffee berries, are kept, some times in battery type cages. If I knew this before our visit then I probably would have asked our driver to miss out this part of our tour but I didn’t, and as a coffee lover, I was very excited to be there. From my research, I gather that the majority of the battery plantations are on the island of Sumatra and not in Bali where we were which makes me feel a little better.

So back to our tour… It started by us being shown around a small area of the plantation where they had many different fruits, vegetables and herbs growing. Some of which were completely exotic to us, some are regularly on my shopping list.

Some Jack Fruit Growing at the plantation

I had no idea that Pineapple grows like this!

Coffee berries growing at the plantation

We then came across our first Civet in a cage, it was a pretty big cage and the cat was sleeping soundly curled up in the corner. 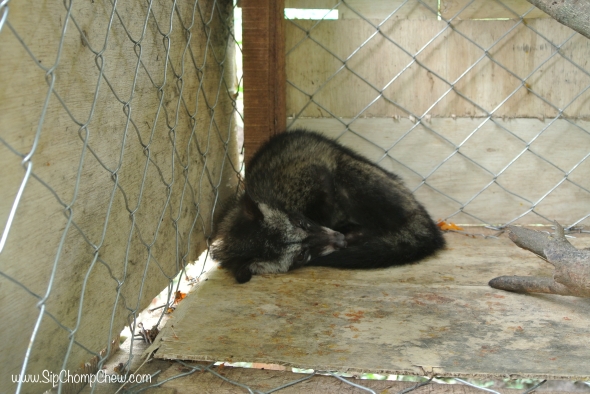 Our guide explained that the civets are let out at night (they are nocturnal) which is when they eat the coffee beans, it is then the digested beans, which ferment as they pass through the animals intestines, that are collected from the droppings as they move out through the other end, if you know what I mean! They are cleaned and roasted before being ground and made into Luwak Kopi.

It was first discovered back in the Colonial Era, the workers on the Indonesian coffee plantations weren’t allowed to consume the coffee beans which they collected so they got around this by instead taking the beans which had been digested by the Palm Civet and cleaning, roasting and grinding them to enjoy the coffee themselves.

After seeing all this, we were offered a chance to try some at the cost of 5 USD per cup, we got one to share. It was a good cup of coffee but I have had better, I really don’t quite understand how it caught on! I have read that a single cup sells for as much as £60 in London, well if you are in London and fancy a decent coffee then I would highly recommend that you head to the Monmouth Coffee Company instead! We also got to sample some other beverages which the plantation sells, they were really tasty but so so sweet! 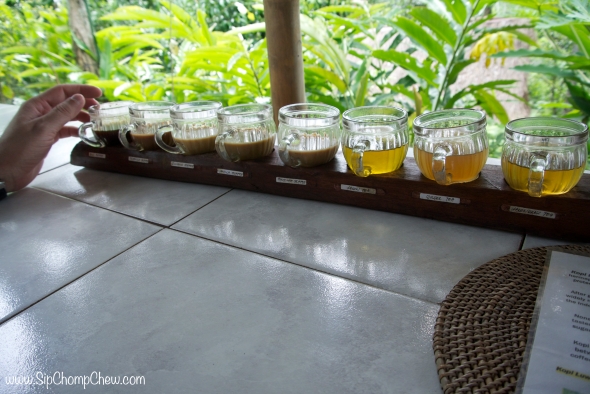 Would you try Kopi Luwak? Or maybe you’ve already tried it? Either way, I’d love to hear your thoughts!